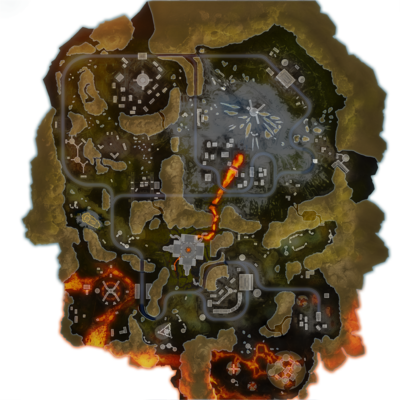 World's Edge is a map introduced in

Season 3 located on the planet Talos.

The once uninhabitable world of Talos became a hotbed of IMC activity when a rare mineral compound was discovered beneath its surface. Heat-reducing towers were built to super-cool its natural lava flows, and the town of World’s Edge grew around them. Decades ago, an explosion in one of the towers covered the surrounding area in a lethal flash freeze. Today, World’s Edge is deserted, its borders inhabited by a small community of hunters who reportedly spurn modern technology.

After the Repulsor attack on King's Canyon and the various attempts to rebuild it proved too much trouble than they were worth, the games were moved to World's Edge.

Sorting Factory, located in this arena, was the site of the murder of James "The Forge" McCormick, an incoming legend, by a mysterious figure. Afterward, the entrance of Hammond Robotics' Planetary Harvester into the arena changed its landscape, devastating Capitol City and opening up lava fissures.