From Apex Legends Wiki
(Redirected from Voices from the Void)
Jump to: navigation, search

Wraith is a legend that is free and unlocked in the base game.

A versatile Offensive Legend, Wraith can reposition and flank her enemies with her abilities. Using

Dimensional Rift can allow her squad to be safely transported over long distances. Finally, her

Voices from the Void passive can give her and her teammates' warnings about enemies approaching.

Subject 611367, Codenamed "Wraith", is a whirlwind fighter, able to execute swift and deadly attacks and manipulate spacetime by opening rifts in the fabric of reality. Years ago, she woke up in an IMC Detention Facility for the Mentally Ill with no memory of her life before. She also began hearing a distant voice whispering in her mind that would keep her awake for days on end, nearly driving her insane.

She was on the facility one day when a portal opened before she was to be sedated. A person wearing a purple helmet comes out and scares the facility staff away. The person berated her for not fighting back and revealed herself to her. She was her from another dimension, on a quest for revenge on the people who experimented on her. With this Voidwalker's help, she learned to trust the voices and was given the device needed for her to safely manipulate the void.[1]

Using a portal to the Voidwalker's dimension enabled her to escape her facility, arriving in Kings Canyon still under construction for the Apex Games.[1] Determined to uncover her true identity, Wraith began a quest to find out more about the experiments and herself. Many of the old research facilities, however, are buried beneath the heavily guarded arenas used for the Apex Games. She now returns from where she arrived in this world and joined the competition, and with every match, she gets closer to the truth.

Into the Void[edit | edit source]

Voices from the Void[edit | edit source] 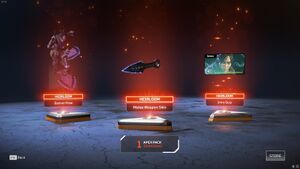 Warnings from other Wraiths