Bloodhound is a legend that is free and unlocked in the base game.

Bloodhound is a fast paced Recon Legend great at pushing the enemy in their base. Their

Tracker can be used to find where enemies have gone, and

Eye of the Allfather will reveal hidden enemies and traps. Lastly,

Beast of the Hunt causes Bloodhound to gain speed and highlights their enemies.

Bloodhound is known across the Outlands as one of the greatest game hunters the Frontier has ever seen – and that's about all anyone knows. Their[1][2][3] identity is a mystery wrapped in layers of rumors: they are fabulously wealthy, a bloodthirsty murderer, a Goliath whisperer, a former slave, half bat, and a dozen other things depending on who's doing the whispering.

All anyone truly knows is that Bloodhound is a force to be reckoned with in the Apex Games, having won atleast two championships. Bloodhound's unparalleled tracking skills are a boon to any team they join, helping them root out hidden opponents and tracking the enemy's movements. Calling on Earth's Old Norse Gods to guide them, Bloodhound believes that destiny is a path that has already been laid out, eventually carrying all to their death. But with that knowledge comes strength, because until that day comes, Bloodhound knows they can't be stopped.

Eye of the Allfather

Beast of the Hunt 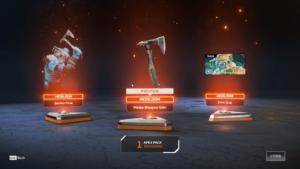 Eye of the Allfather

Beast of the Hunt