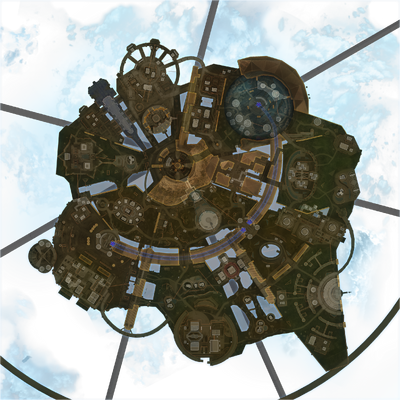 Olympus is a map released in

Season 7 located on the planet Psamathe.

Olympus was a city built on dreams. Built in 2640 by billionaire humanitarian Lillian Peck[1], this utopia floating in clouds above Psamathe was once a place where the brightest minds in the Outlands could gather and exchange ideas, leading to breakthroughs in the sciences and arts. Olympus produced a number of breakthroughs for the Outlands including developments in eco-friendly Jump Drives for short-distance vessels, a Phase Technology for immediate transportation called the Phase Runner, and drone technology for health and security systems.[1]

All dreams come to an end however, and this one ended explosively: an accident in an experimental research facility led to the creation of the Phase Rift (a massive bubble of Phase energy), and the Outlands’ best and brightest quickly abandoned the city.

However, Olympus itself was maintained by advanced computer systems, so it quickly found new buyers in the Outlands’ elite. For 40 years, it served as a lavish vacation spot with the Rift as a tourist attraction. Unfortunately, the Rift grew unstable overtime, and Olympus was fully evacuated six months ago. Now Hammond Robotics, with the support of the Mercenary Syndicate, has transformed Olympus into a new stage for the Apex Games – though why is anyone’s guess. 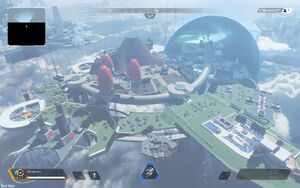 An early iteration of Olympus from May, 2019.

The background of the Season 4 launch trailer.