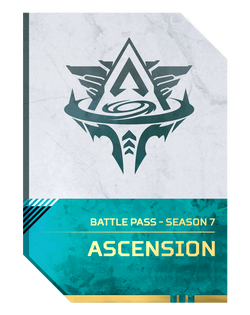 The Battle Pass is a system that offers players rewards for playing and completing challenges during a predetermined period of time called a "season".

There are two types of Passes available that can be purchased in the Battle Pass tab:

Unlock premium rewards up to the current Battle Pass level.

There are two main systems for Battle Pass progression. One that was in effect from

Season 2 to Season 6, and one from Season 7 onward.

While playing, you will receive

Stars. For each XP you get, you will gain the same amount of stars. You also gain stars by completing challenges or picking up treasure packs. By accumulating enough

Battle Pass levels that will then unlock the rewards set for that level. The number of stars required to get a

Battle Pass level increases each time you gain a level (excluding those earned directly through challenges), beginning at 9.000, ending at 54.000 (will not increase after this amount), resetting every week. As soon as you purchase the premium Battle pass, you can purchase levels with Apex Coins. You cannot purchase levels after level 100. Battle Pass levels per season are capped at 100 with a bonus 10 levels that give you an exclusive reactive Legendary skin. Battle Pass rewards are exclusive to that season and will not come back again, letting you keep "your OG status".

Season 2, Challenges were introduced allowing players to gain Battle Pass levels faster by doing specific tasks in-game. These challenges are divided into Daily and Weekly challenges. Some challenges outright grant a level while others give out stars.

Rewards are divided into two tiers: the Free and the Premium tier. All players can get the rewards from the Free tier of the Battle Pass while items behind the Premium tier are only for players who purchased that season's battle pass. Rewards include Legend and Weapon skins, Banner Frames, Badges, Skydive Emotes, Loading Screens and Music Packs. The Premium tier also grants players enough

Apex Coins to purchase the next season's Battle Pass and enough